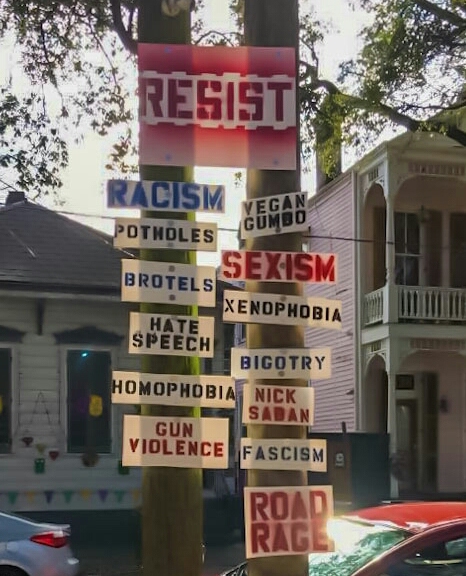 If you are from New Orleans or have ever visited you probably know we have potholes, a lot of them, everywhere. Our potholes do not discriminate on neighborhoods either, you will find them Uptown, 9th Ward, in many major streets and many side streets, the point is we have potholes, a bunch of them.

So it comes as no surprise that we complaint about them ALL the time, as soon as you leave your house and hit the first one “grrr these f… potholes” pops into your head. But as much as we complain, and no matter how many dicks we draw around them to force the city to repair them, yes apparently someone did that once. The truth is that we have kind of grown to love the damn potholes. Furthermore, we miss them once they get all patch up and the streets are smooth as a baby’s butt.

Take me for example, every morning on my way to work I had to avoid the same crater, yes, this one looked like a meteorite had impacted N. Claiborne Ave. So every day depending on traffic conditions I would have to either switch lanes or get mentally prepare for the possibility of my truck just breaking down in the middle of the street. Then one morning the hole was no longer there. There I was driving through the 9th Ward waiting on a pothole that vanished. It had me questioning my own sanity, ” Was sure there was pothole there, did I imagine it? Am I going crazy?” A couple of days later, while I was still struggling to accept the fact that the crater was not there anymore, I noticed how the recently poured concrete contrasted with the rest of the street, the hole had been patched up and now I was missing it.

Don’t get me wrong, I did not miss the pothole itself, nor did I miss the expectation of it every morning, I mean no matter how exciting this sounds my life is not that boring. But it did have me thinking, what would happen if all the streets of New Orleans were fixed? No one single pothole left behind. I believe the city would be missing part of its charm and uniqueness, part of what makes Nola, well Nola. I guess what I am saying is that I would rather curse out loud every time my truck jumps up and down while driving through Magazine Street, than to have New Orleans not be itself, and the fact that I live in the swamp is my ally, I will probably resist most of the things on my featured photo, but I might let the potholes slide, but definitely resist BROTELS!

Check out the Pimp My Pothole Gallery to see how creative Nola gets with potholes.

A peek at my brain